In 1789 the peace of Europe was shattered by the French Revolution.  The ordinary people of France had suffered too long the excesses of monarchy and aristocracy, an outworn feudal system and heavy taxation.  Ideas of an enlightened popular government and the rights of man had been filtering in to France from England, and also from the newly formed United States of America.  Eventually the situation exploded, and within four years construction and deconstruction had turned France upside down, with a free republic proclaimed.

The excesses of the revolutionaries caused alarm through the rest of Europe, and in 1792 Austrian and Prussian troops invaded France. In 1793 French patriots overran the Austrian Netherlands and threatened Holland, and Britain was drawn into the war.   By 1797 Britain faced her alone, with Spain & Holland on the side of France.  France had produced the all-conquering military genius of Napoleon Bonaparte.

By 1803 the war had grown from a struggle against republican France to a battle against Napoleon’s attempted domination of Europe.   His plans to invade Britain were foiled by the Navy in the victory off Trafalgar by Nelson.

By 1807 Napoleon, now Emperor of France, had reached an enormous height of power.  However, his decline began soon after, with defeats in Portugal and Spain in the Peninsular War of 1808 – 1814, a retreat from Moscow in 1812, a defeat at Leipzig in 1813, and finally in 1815 his defeat at Waterloo led by the Duke of Wellington.

In those days, wives and families of soldiers could travel with their fighting men, performing domestic chores for them – such as cooking, cleaning etc.   The Merriott censuses show that Ann LAWRENCE was born in Antwerp, Belgium (at that time Holland) about 1814.  Her father, Luke LAWRENCE was a Corporal of the 81st Regiment, which was stationed in what is now Belgium in 1814 – 15.  The Regiment was then posted to Ireland for the next five years or so.   Just as the Regiment was about to be sent overseas again, to America, Luke Lawrence was medically discharged (a bowel problem)  and the family returned to Merriott.  [Information courtesy
of Peter Scott].

The following is known of the three children:

Catherine Pattemore, married to James Sweet on 5 September 1825, was noted in the 1851 census as born in Brussels, Belgium.   Her parentage is not known, but her approximate year of birth was 1790.    Does anyone have any more information on Catherine?  I am presuming her parents were in Belgium in connection to the Napoleonic Wars rather than on a holiday!

Tom Webb was a Merriott lad who fought in the war. 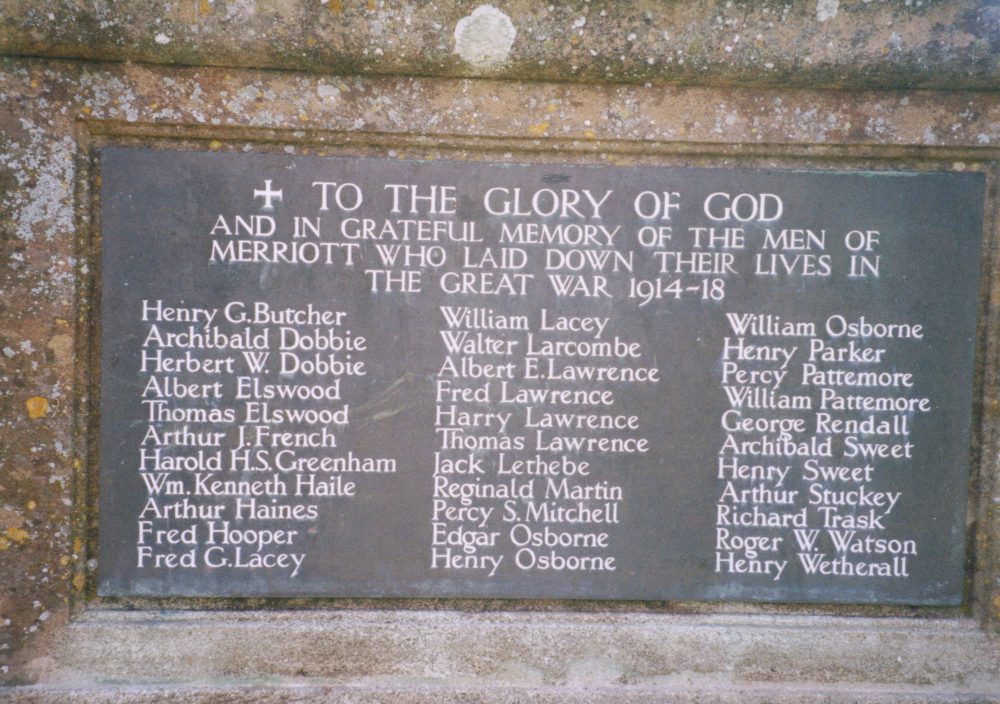 Memorial reads:  To the Glory of God and in grateful memory of the men of Merriott who laid down their lives in the Great War 1914-18
Photo courtesy of Mary Gardiner 2003 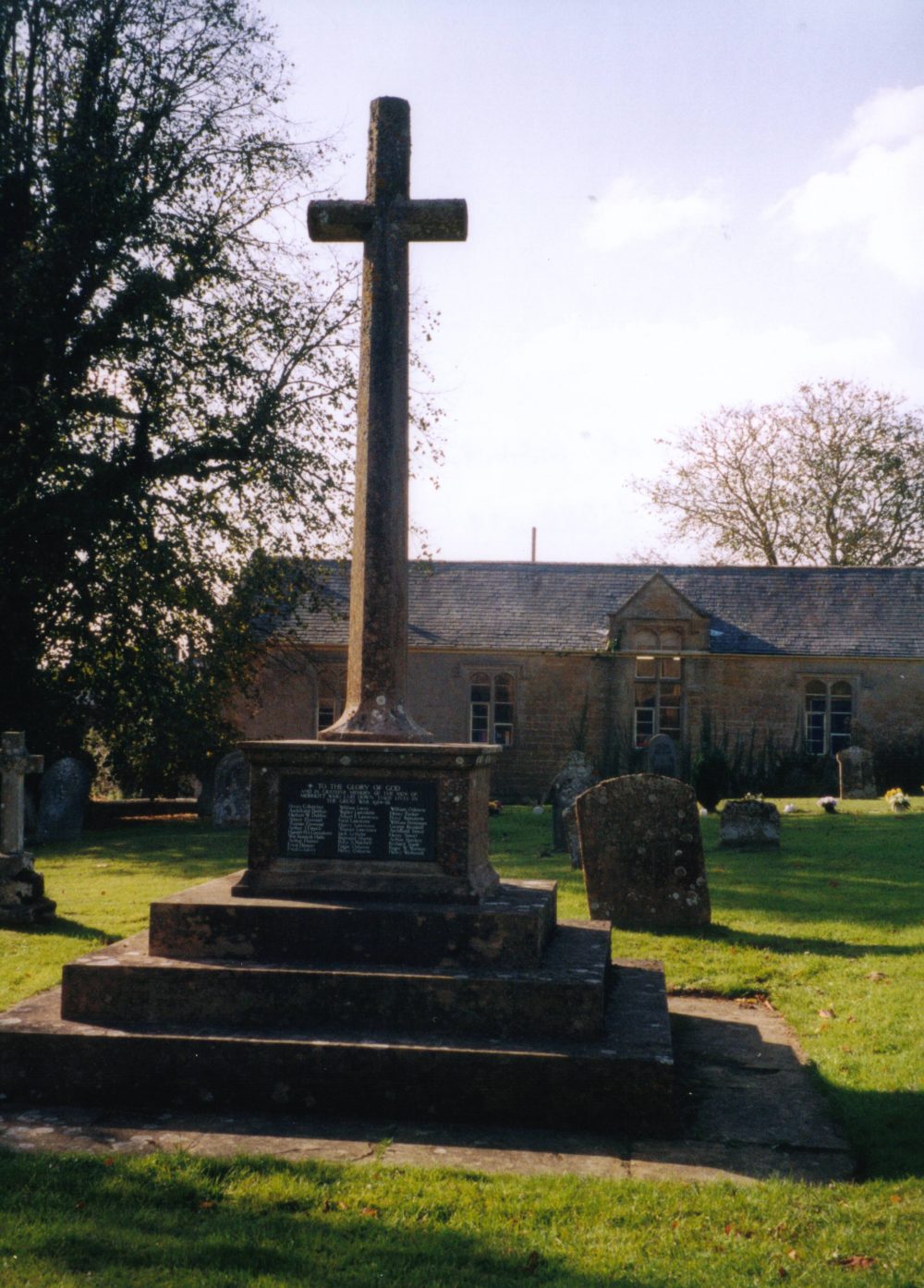 Sue Smith has done some research into the names on the Memorial.  Thanks Sue!

For details, go to this page: Research on the Names on the World War 1 Memorial.

Some of David Gibbs’ anecdotes are about the Evacuees during the War, and the influx of American Soldiers.   Have a look at:  At War With the Evacuees and
Red Dominoes and Green Tins of Dubbin.

Brian Tasker has contributed the following information about the World War 2 Memorial:
* William Osborne was otherwise known as Billy Utchem.   A photo of William, along with his friend Arthur Gibbs, can be found here.
** Regarding Archibald Willoughby Gwatkin and Frederick Charles Nicol Gwatkin:

These were the two sons of General Sir – – -, and Lady Gwatkin who lived at Merriott House during the War, after the Weys, and before Lt. Colonel Payne-Galway.

The Gwatkins were charming people, very Top-Drawer, but very approachable. Lady Gwatkin used to rather remind me of the Queen Mother ! I had not realised that she had lost two sons in the War. I would have thought that through the church I would have been aware of this, perhaps I had just forgotten, so please may we re-remember them.

The Lt Colonel Payne-Galway who followed them appears in David Gibbs’ Scouts photo.

I have done some research on the above names, on the Commonwealth War Graves Commission Website – go to
Research on the Names on the World War 2 Memorial.