The Warry Family of Merriott

Note:  Stephen Berry is happy to field questions about the Warrys: email Stephen at:  stephen.berry@tesco.net  Stephen can email the Journal of Warry Family History to interested persons.
Stephen has said:

“Onesiphorus Warry, by the way, descended from the West Coker branch of the family; a branch which I have every reason to believe had its last common ancestor with the rest of the family dying in 1597. So he is related to the other Warry family members, but exceedingly distantly!”

Earliest Mention in the Merriott Records

Two marriages announced the arrival of WARRYs in Merriott, late in the 18th century:

Richard & Robert were brothers, possibly twins, both baptised on 10 December 1768 in Cricketmalherbie, sons of Robert Warry & Grace Pope.  Richard was a farmer, and Robert was engaged in the occupation which the Warrys are well known – blacksmithing.

A pedigree can be found on the Family Search site :  https://familysearch.org   but much of the pre- 1768 information is unverified.

Thus the two first families to baptise children in Merriott were:

Robert was noted as being a pauper at the time of the baptism of Mary in 1794.

There were two burials in this early period, which may or may not have been children of the above marriages:

George Warry, son of Robert & Elizabeth, moved to East Coker.  His first wife was Hannah Bartlett Masters; they had three children – George, born about 1831; Samuel born about 1838, and John born about 1839.   He appears in the 1851 census for East Coker as a Millwright.    In 1849 (30th September) George, a
widower, married a widow, Mary Withey, nee Langdon. At this time his occupation was noted as a Carpenter.

UPDATE (Feb 2004):  Contact from Mike Warry, of Queensland, Australia was received regarding another son of George & Hannah – John, born 22 January
1839 at Stoford, Somerset.   John emigrated to Queensland in 1858 on the same vessel as Samuel Osborne of Merriott and his family – the Alfred. Read more about this family on this page.

WARRYs in Merriott in the 19th Century

Eliel & Hannah Warry moved to Mosterton, Dorset, where Eliel worked as a Blacksmith.  The family is noted at Mosterton for the 1851, 1861 and 1871 censuses. In the 1881 census Eliel appears in Yeovil, but was buried in Mosterton in 1884.

Onesiphorus Warry was born in Haselbury, according to census information.  Whether he was somehow related to the Merriott Warrys is not known. Onesiphorus married Thurza Patch in Merriott on 6th October 1825.

Frederic & Mary Warry were not mentioned in Merriott records after their marriage.   NOTE:  The family can be found in Jersey, Channel Islands by the time of the 1841 and 1851 censuses.   By 1861 Frederic(k) is back in Merriott as a widower, living with Robert & Jane Trask.

John Warry, born Chard, Somerset, son of John Warry, a shoemaker, was not mentioned in the Merriott records prior to his marriage in 1853 to local girl Mary Osborne.  John worked in various positions at the Sail Cloth Factory.  John & Mary appear on the 1891 census for Merriott, but I don’t have any burial data for them.

Note: Somerset Record Office has Photographic Albums with occasional notes and negatives of Eliel & Anna Warry of Merriott and Mosterton and one volume of their offspring, 19th & 20th Centuries. Accession No:  S/1740; G/1764 Catalogue Mark: DD/WRY. Other Warry families from places such as Stoke sub Hamdon are also included. 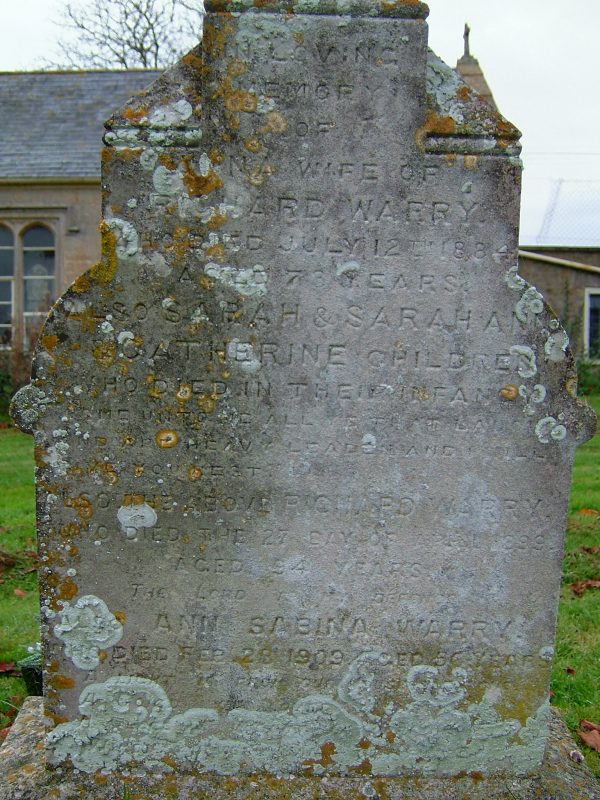 The surname WARRY accounted for about 1% of the population of Merriott at the time of the censuses, ranking 18th most common surname.

WARRYs in Merriott in the 20th Century

There were no marriages recorded at All Saints Church 1901 – 1924; and only five burials 1901 – 1924.
For more information, please email sue@merriottfamiliesgenealogy.net

Listed under Accession Number:  S/1740; G/1764 Catalogue Mark: DD/WRY are Warry and associated families records.  This is a summary of information available on the Somerset Archive & Record Service Website.  http://www1.somerset.gov.uk/archives/

11.Correspondence and papers concerning Warry family genealogy including wills going back to 1582.

15. Photographs of arms and armorial seals of the Warry and related family.

16. Photographs from portraits of members of the Warry family of Shapwick.

Quite a lot of interesting detail for Warry researchers!

Some Warrys moved to Hinton St George, and then to New South Wales, Australia